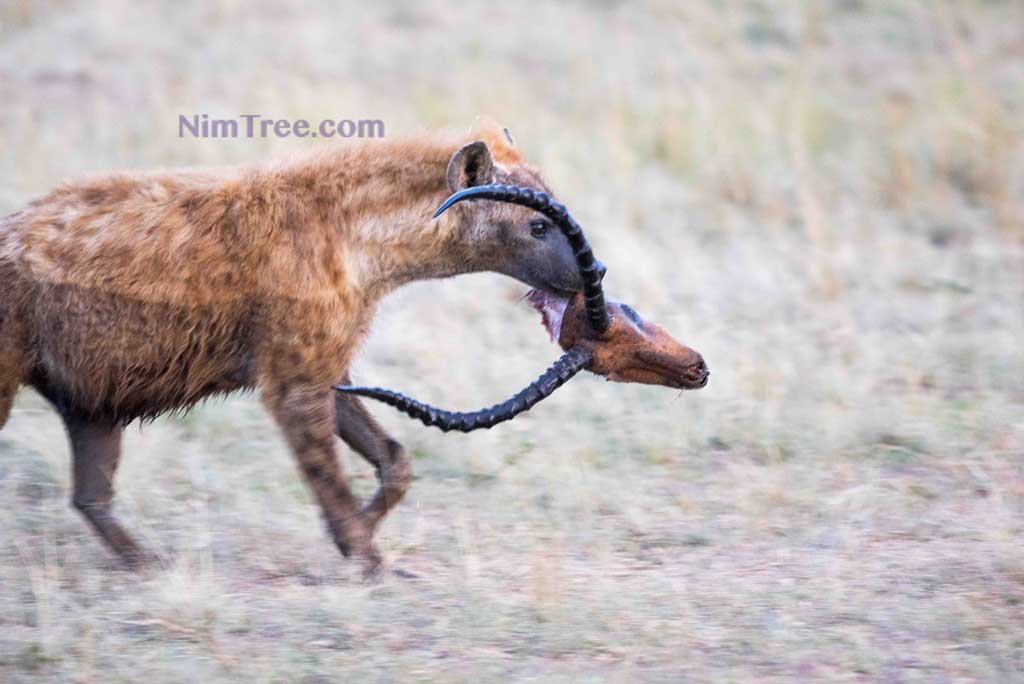 Every image tells a story and every image is worth thousand words. This is an attempt to put those thousand words in front of our blog visitors and other wildlife photographers so that they know what goes on behind the scenes.

This image is bit special because it tells about animal behavior and also because it has been shortlisted (twice) for the final rounds of prestigious Wildlife Photographer of the Year (WPY) award.

In Masai mara, there is abundance of animals everywhere. so much so, that if a leopard makes a kill, other scavengers like hyena will arrive quickly in a pack and the poor leopard has to let go the kill, rather than sustaining life threatening injuries from the hyenas.

Clever leopard has developed habit of dragging their kill to the treetops, so that most animals cant reach there and the feast continues for couple of days.

Leopards are so strong, that they usually drag the carcass which are about double their own body weight to the treetops.

Once the kill is stashed on the tree, the leopard starts eating the kill.

It has been observed that the leopards starts licking the blood first of all. Then, when it comes to eating flesh, big cats usually starts form the soft part of the animal.

In this case, it was the bottom of the antelope where the first bit was taken.

The leopard opened the carcass from rear and feasted on it, but the front part of the body is almost untouched and intact.

After the meal, this leopard got his bellyful and went to a nearby branch to take some rest.

The tree has these two beautiful animals and at first glance the springbok also looks asleep, just like the leopard. Only on careful observation, it becomes visible that the springbok is dead.

It almost creates an illusion, that these two animals are not bothered by each others presence and both of them are resting on two different branches of the same tree.

Since our vehicle was close to the tree, we did not need a long lenses. So I kept my one camera down (which was attached to 400mm lens) and quickly picked up the camera which was already attached to 70-200 lens.

It is always suggested before our safaris that every photographer should ideally carry two camera bodies of the same brand. This is really useful if your only camera stops working in the middle of the Savanna during your photographic safari, the second camera would save your trip.

Moreover, you can attach long lens on one body and medium range lens (eg. 70-200mm) on another body. That way, you would always be ready to shoot with correct focal length, without wasting crucial moments in changing lenses. By not changing lenses during the safari, you would also keep your gear dust free and they would last longer. If you do not want to invest in two dedicated bodies, its best to rent the gear for the duration of your safari.

I wanted to show everything in the scene, without focusing on one animal or the other, so I decided to shoot at F/8 in aperture mode at 1/400th of shutter speed.

Since neither carcass nor the leopard were moving, 400th of a second was a decent shutter speed at that time. I was also using a beanbag for support.

However, after first shot, it became apparent that the lighting conditions was not great and I swiftly moved to manual mode to shoot.

Since I wanted to take this image correct in camera, rather than correcting in post processing, I overexposed the scene by 1 stop, with F/8 aperture and 400th of a second shutter speed. Full frame cameras are great when it comes to low light capabilities.

This time the image was correctly exposed against the sky.

In wildlife photography, photographers must follow ethics and put animal welfare first and not be reckless just to take pictures.

Wild animals are very sensitive to light, so using flash must be avoided to take picture. The sudden burst of light can agitate the animals and they may become aggressive.

In post processing, I have correct the saturation and sharpness a little bit.

After some time, the smell of the kill attracted hyenas to the scene but they were late to the party. The leopard had a healthy meal and the hyenas were satisfied with few droppings from the tree.

We use cookies to ensure that we give you the best experience on our website. If you continue to use this site we will assume that you are happy with it.Ok